Emmanuel Daniel Buzabeye, popularly known as ‘Edaniels‘ is a visually impaired singer, songwriter, drummer, saxophonist and guitarist whose songs have toured the length and breadth of Nigeria and beyond. Speaking extensively to Revelationmusik, Edaniels made some thrilling revelations about himself and his career.

Born on the 10th of September, 1992 into the family of Mr & Mrs Daniel Buzabeye and the fourth of five children. Edaniels hails from Dikko in Gurara local government area in Niger State Nigeria. He attended Government Secondary School Kwali, where he graduated in 2012. He then proceeded to school of The Visually Impaired Federal College of Education Zuba Abuja where he was a member of the Fellowship of Christian Students (FCS) choir. In his quest for more knowledge, Edaniels applied to Nasarawa State University and luckily got admitted into the school but sadly couldn’t continue with the admission process due to some logistic issues from the school.

Edaniels has worked with numerous popular music artists such as Solomon Lange, Kenny Kore, Nosa etc. Edaniels is also the winner of the Abuja Gospel Voice Contest 2014, winning for himself a brand new car and a recording contract. When asked how he manages to learn musical instruments and chat on social media? Here is what he said;

“I think God has given me the grace, whatever I touch works for me, though have been guided by individuals but am a self-thought instrumentalist. I think I discovered it early enough. Cos I started playing the guitar at the age of 6-7”.

“And for my media or social life, I use phones that have a talk back capability. Whatever a person sends, it reads then I reply”. He said 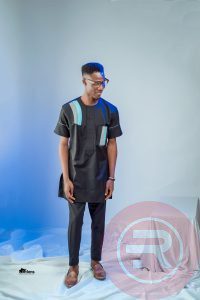 In spite of his visual impairment, Edaniels also revealed that he does a lot of difficult tasks all by himself without help such as ironing, washing and fetching water from the well. He also revealed that being visually impaired is not an excuse to fail, as he plans to achieve greater heights in music, complete his education, build his career and be an icon to people who feel or think they are disadvantaged.

“I think what I will say to people like me and to those that want to be like me is; the first trust and believe in God and they should know there is no limit and boundaries to whatever they want to achieve with God on their side”. He added