Kespan Maxwell Gimba popularly known as Kespan is a talented young man with a wonderful gift of a sweet sensational voice which always captures the attention of every listener.

He is a gospel artist and very skilful in playing his own invented instrument. Born in the Bauchi state of Nigeria to the family of Mr Maxwell Gimba. KeSpAn started professional music back in 1999 and since then has been recording singles.

Maxwell Gimba KeSpAn began skilled music again in 1999 and since then has been recording singles.

He invented an instrument from the local Hausa Fulani instrument called ‘Gurmi’ which is a combination of a stick, calabash, animal skin and strings, he calls the instrument ‘KAISZ’. He said “I call it KAISZ because I invented the play. KeSpAn calls his genre of music J’RACBS’ it is actually the abbreviation of the basic fusion of styles you can play with KAISZ. 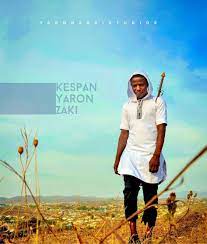 Kespan has produced a number of songs and has been featured in over 50 songs to this point. Still single, who is aware of he may simply blow our minds quickly.